Her houses always have construction problems.

Rented 3 houses from her in different locations, each house had multiple problems such as flooding, broken lights, and damaging the neighbor’s pipes during renovation.
The second house had serious flooding problems because they didn’t build the pipes very well, there are some days you smell toilet all the time, neighbors would also come knock the door and complain to you.
When there is a problem, she will send workers over to fix it but the problem is never truly fixed. She always uses the cheapest workers available who use the cheapest materials.

She’s not the landlord.

The third house we rented with her, the original landlord (not Holly) would often come to visit the house. He cared about the house’s condition, after all he knows that we pay a high rent for the place. He was shocked to find to find out that Holly was charging triple the amount that she was paying the him. The landlord also told us that that Holly was quite rude to him on the phone. Whenever the landlord called asking about rent, Holly would redirect him (the landlord) to her husband; he never picked up the phone.

Fortunately, the landlord didn’t try to ask for money from us. Once we moved out he asked us for  some tips on how to generally improve the quality of the house as a whole.It would probably have been easier to deal with the landlord directly rather than having Holly act as the middleman.

So, at the majority of places that you rent, the landlord will ask for 1 month’s deposit. Holly wanted 2. Not a problem because we take good care of the places that we live in. We refurnished the house with our own furniture.

We had to break our contract early, and she didn’t return anything, citing minor damages and other frivolous and ridiculous costs. At the end of it all, we just wanted to leave so we left everything we had purchased for the house behind. She wants to take everything from you, even though you were her customer for three years, she doesn’t care.

4) She does illegal business, she takes your money like vampire take your blood, why still people rent with her?

A friendly warning to people in Beijing, her business is illegal since she is always secretly renting all the government owned(公家） hutong houses. She never give back your deposit money when you move out, even though you have dozens of construction problems during your stay? Even though the house looks more interesting than other normal hutong houses, but according to all those terrible things, do you still feel safe to rent from her?

You’re one of HomeUdream – Courtyard007 too? Send me an email at courtyard007.victim[at]gmail.com

I lived in one of Courtyard007’s Homeudream apartments for less than three months and decided to leave after two floods and a gas leakage.

After three days in the countryside, I came back to Beijing to find my apartment completely flooded. The floor was still wet, a few bumps had formed and the carpet, shoes and anything touching the ground were completely soaked. I saw the agent in the courtyard (she lives there as well), informed her about the damages and asked her to send someone to have a look.

She replied that she did not know what was wrong and that I just had to deal with it, because the rain had been exceptionally heavy. When I insisted she deal with the problem, the agent switched topics and told me that calling her “Ayi” was highly offensive as I was older than her. I apologized and explained that it was a genuine language mistake. But she kept the accusations coming.

She then told me I had to inform her every time I left Beijing for more than one day. She concluded by saying that she was going home otherwise she would beat me up and that I should never disturb her on her days off.  No worker showed up to look at the apartment.

In July, on one of the days when heavy rain soaked Beijing, I asked the agent to keep an eye on my apartment while I was at work. When I sent a message to ask about the apartment, she replied that everything was fine.

However, when I came home I realized that my apartment flooded once again and that someone had been inside and moved a couple of objects to avoid them getting wet. The agent then told me that since it didn’t flood much, she felt no need to tell me. The amount of water that sprang up from the floor when pressing on the wooden planks made it obvious that the apartment had a major structural issue.

The water seemed to come from underneath the floor, probably due to a complete lack of insulation. If within a week, a few wooden objects and some food turned moldy, one could only imagine the impact that this would have on a resident’s health. Again the agent refused to send someone or acknowledge this was a major issue. When I threatened to leave if she took no action, she told me that I had no right to move out over what she viewed as a small problem.

Living in a hutong and having to use a gas bottle I decided to buy a gas detector. When the alarm went off one night I asked the agent to come and do a proper check the next day. Instead of calling on a qualified technician, the agent just called the man selling gas bottles, who did a dubious test with soap and water.

When I told the guy to take away the gas bottle, as the test failed to meet any reasonable safety standard, the agent did not intervene, nor did she suggest other alternatives, and just asked for her 100RMB of deposit back.

After one month living in the flat, the agent started expanding her house. As a result the courtyard shrank by a few meters, causing all the bicycles to be parked directly in front of my entrance.

Workers showed up on weekends, and when I told the agent that this was illegal, she pretended not to know and said that the renovations would be over in 5 days. After two months of ongoing construction work, the courtyard was regularly filled with dust and rubbish.

It was a old hutong apartment in zhangzizhonglu
And she was nice with me and my husband, sending someone quickly when things used to break (way too often).
She was also patient when we were late with rent
The problem came when we had to leave
We told her that we were leaving two months in advance, because we were leaving China, and I also told her that I would have found another couple to take over our lease, so she wouldn’t have lost any money.

She said that it was ok, but to get my deposit back I would have had to charge the new tenants, not only the two months left in our contract and the deposit, but also the agent fee.
Because she literally told me that she wanted to make more money out of the situation
Basically she told that if I wanted our deposit back I would have had to be her agent and making her earn more money

– ok, but this agent money will not go back to you ?

That’s right. The agent money was for her

Her exact words were: I want to make more money out of the situation
Not only it’s not fair, it also sounds kind of illegal since there was not agent involved.
I showed the apartment to the new tenants.
And my husband and I ended up losing half of our deposit even if we found someone who took over the lease and We the apartment in perfect condition .
She always seems available to help you and be a good landlord but in the end she only tries to suck money out of you.

We started to share the blog 2 days ago about courtyard007 (homeudream) in Beijing, and seems like the impact is great! Just wanted to let you know that this is working!

And here some of the first feedbacks from wechat:

Everyone should be wary of Holly. My friend rented an apartment with her and it turned out to be illegal. The true landlord of the apartment showed up to my friend’s place of work with the police. He had to hire a lawyer to get everything sorted.

We lived in a holly hutong in 2011. Left because we were freezing to death. Her husband would come to “fix” things but just chill on our couch with *****. Another friend I have is having a similar experience right now with her

By the way, a new colleague of mine was going to rent one of holly’s apartment and then changed her mind after seeing my post, so on a small scale it’s working!

Do not hesitate to spread this blog, and email us at [email protected] if you want to share your story with Courtyard007, it will really helpful for everyone in Beijing!

In 2015, I started living in a Hutong located around the Beixinqiao area. They run the website www.courtyard007.com (now homeudream.com)

So let’s start by saying that a lot of the houses that Courtyard007(HomeUdream) rents are not owned by themselves. That in itself isn’t a problem, the problem is that the houses are owned by the government (Screen shot attached below). These government-owned houses are not allowed to be re-rented to other tenants.
Therefore you can’t obtain a housing slip, here are some things that you need your housing slip for:

Therefore the contract given to you is not an official government-approved contract. 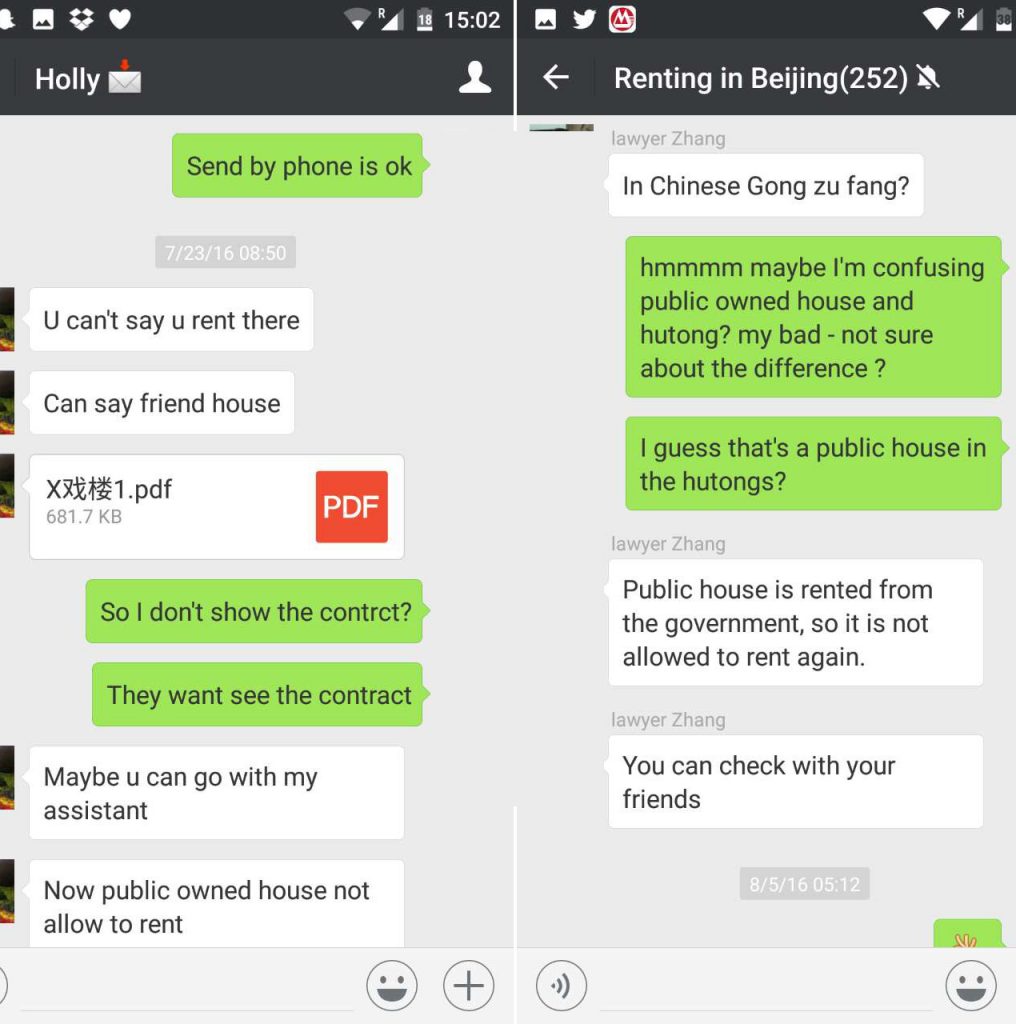 The contract (that is not legally binding), stipulates that any future viewing of the apartment can be done in the final month of the contract. However, starting from 2 months before the expiration of my housing contract, a number of guests wanted to view the house. They were forceful and at times rude.

At the end of my term, the agent deducted a number of costs from my deposit. Here are some, with evidence.

I asked the agent to come to the apartment 3 weeks before the contract expiry so she could tell me what I needed to fix and she refused to do so. These costs weren’t brought to my attention until it was too late for me to fix them. I talked to the previous tenant and he told me the exact same story, his deposit was 8,000RMB and he lost all of it.

The hutong comes with floor heating- it would be great if it worked though.
I requested repairs during winter several times but nobody ever came. They would come over and say that the room was really warm and that I was imagining things- my thermostat said 15 degrees, and believe me, it felt like it.